NEWINGTON, CT, Sep 23, 2004–NASA International Space Station Science Officer Mike Fincke, KE5AIT, told youngsters at an elementary school in Japan September 17 that he’s been so busy during his duty tour in space that it’s hard to believe it’s almost over. Fincke spoke via Amateur Radio from NA1SS aboard the space station with fifth and sixth-graders at Aoyama Gakuin Elementary School near Tokyo. The contact was arranged by the Amateur Radio on the International Space Station (ARISS) program. Fincke answered the youngsters’ questions in both Japanese and English.

“Because we are working so hard, it seems that the time goes by very, very fast,” Fincke said. “We are already five months into our mission, and it feels to me that we started yesterday.” Fincke and ISS Expedition 9 Commander Gennady Padalka, RN3DT, will wrap up their six-month stay aboard the ISS in mid-October. Fincke told the students that the two have gotten along well during their time aboard the ISS by exercising “a lot of patience.”

One Aoyama pupil asked Fincke if his stay in space had made him more religious. Fincke answered in the affirmative.

“Because this is very dangerous, and I have had a chance to think about things, and I think I should thank God every day for letting me have this opportunity and for keeping me safe,” he said.

As he’s indicated in past ARISS school group contacts, Fincke said he’s been having a good time in space, although it took a few days to get used to his new environment. “For five days, I felt very different when I first came to space, and then I felt better,” he said. “Now I feel very, very good in space. It feels great to be able to fly.” Responding to another youngster, Fincke said he had wanted to fly in space since he was very young, and now that he’s done it, he likes it even more.

Control operator of 8J1AGE at the school was Kuniori Togai, 7M4NEK, who once attended Aoyama Gakuin Elementary School and now is a junior in high school. In all, Fincke answered 13 questions during the approximately 10-minute contact. On hand at the school were nearly 200 visitors, including reporting teams from four television stations, one radio station, four newspapers and a monthly magazine. Among those taking it all in was Japan Amateur Radio League President Shozo Hara, JA1AN.

The following day, an Amateur Radio conversation with Fincke was a main attraction of “The Long Night of the Stars” event held at the European Space Operations Centre (ESOC) in Darmstadt, Germany. Some 175 institutions, observatories and organizations in Germany, Switzerland and Austria joined forces for the occasion. During the direct VHF contact between the Center’s DL0ESA and NA1SS, Fincke extended greetings to all from Padalka and himself. “We send you our best,” he said.

In a lengthy monologue, Fincke outlined what he and Padalka have been doing aboard the ISS in recent days. Recent tasks included installing antennas during a space walk for the automated transfer vehicle or ATV, a European Space Agency project. “It was very exciting for us to step outside into the cosmos with only several millimeters of fabric and a little bit of metal between us and the entire cosmos,” he said.

Fincke said he was looking forward to the future when all humans can explore the stars, “not just through a telescope, but to venture there together. We’re working hard at the International Space Station toward that goal.”

Fincke said that while their activities don’t really seem like work, “we do get tired at the end of the day, and we usually eat our dinner late in the night, maybe about 9 o’clock PM.” He said he checks the news via e-mail and can also talk with his family, watch DVDs and read electronic books. “There’s all kinds of things to do, just not that much time to do them,” he added.

Rolf Maarschalkerweerd, DK7FU, was the ground station operator at DL0ESA for the ESOC contact with NA1SS. The entire conversation was broadcast live throughout the Center.

“It was a nice late summer evening, and the sky was clear,” said ARISS Europe Chairman Gaston Bertels, ON4WF. “The crowd followed the ARISS contact on the big screen outside, and at the same time could see the ISS crossing the sky as a bright moving star. Quite an experience!”

Some 1200 visitors and 150 staff members were at the ESOC for the occasion. Another 500 visitors at nearby Mannheim Radio Observatory also listened in on the conversation. An additional 120,000 witnessed the contact at participating observatories and institutions in the three neighboring countries.

The event also attracted the attention of 28 journalists and their associated staff members from 11 newspapers and magazines, four news agencies, the Hessen TV station–which relayed the contact to its main national channel–and four radio stations.

ASTRONAUT MIKE FINCKE PARTICIPATES TO THE “LONG NIGHT OF THE STARS”

Saturday, September 18 2004, the European Space Operations Centre (ESOC) in Darmstadt, Germany was hosting “The long night of the stars”, a big event in which 175 institutions and organisations in Germany, Switzerland and Austria participated.

At 20:54, Mike Fincke, Science Officer and Flight Engineer onboard the International Space Station, called the ESOC amateur radio clubstation DL0ESA for a scheduled ARISS contact. Rolf DK7FU operated the groundstation and the signals from Space were loud and clear.

Mike, KE5AIT sent his greetings and the greetings of Commander Gennady Padalka to the audiences at ESOC and in the many participating institutions. He spoke of his work onboard the ISS and mentioned the Spacewalks he has performed with Gennady. One of their tasks during these Extra Vehicular Activities has been to install antennas for the European ATV, the Automatic Transfer Vehicle which is presently near completion.

The astronauts have very busy days, but also some free time. They have dinner late, at 9 PM (UTC). They have telephones to talk to their family and they also stay informed of the news of the day. Mike is fond of reading electronic books that are uploaded on demand.

About stars and planets, Mike stated they look the same as from earth but don’t twinkle, since there is no atmosphere. He much appreciated the opportunity to discover the southern constellations.

The ARISS contact was video broadcast across ESOC live. There was also a big screen in the open. It was a nice late summer evening and the sky was clear. A crowd followed the ARISS contact on the big screen outside and in the same time could see the ISS crossing the sky as a bright moving star. Quite an experience. When Mike Fincke stated that he was looking forward to the joint exploration of Space by all nations: “Humans’ Future in Space”, his words were followed with rapt attention by everyone, old and young, with a huge crowd of happy, excited faces all around.

At ESOC about 1200 visitors and 150 staff members assisted to the contact. Moreover, in the nearby Mannheim radio observatory 500 visitors also followed the spacetalk.

In total, 28 journalists and their associated staff covered the event, of which 11 newspapers and magazines, 3 news agencies, the Hessen TV-station (which relayed the material to the main nationwide channel ARD) and 4 radio broadcast stations.

The number of visitors in the 175 participating institutions was 120.000 and a sizeable proportion of these witnessed the ARISS contact live.

ESOC radio club members were quick to endorse the idea, and Khan contacted Gaston Bertels, the manger for Europe at ARISS (Amateur Radio on the ISS). With a sell-out crowd expected at ESOC on 18 September, it wasn’t too difficult to get approval for the call.

The all-volunteer ARISS program aims at helping students experience the excitement of amateur radio by talking directly with crewmembers on the ISS and in so doing boost interest in science, technology, and space.

The call was placed from ESOC’s amateur station, call sign “DL0ESA,” located in a container trailer on top of the centre’s parking garage. “The club has equipment to operate on amateur radio short-wave bands at HF, or high frequency, as well as VHF (very-high frequency) and UHF (ultra-high frequency) and some microwave bands,” says Rolf Maarschalkerweerd, from ESOC’s Spacecraft Operations Engineers Office and a radio club member.

The call is now history, and earlier this week club members finished editing a video report of the conversation with ISS astronaut Mike Fincke (to watch the club’s video, access the link at right). 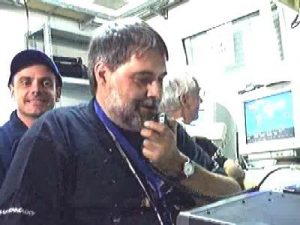 Beside him is Boris Smeds, club chairman and head of the Systems and Requirements Section, who operated two PCs used for automatic antenna tracking and calculation of Doppler shift and other signal parameters.

Others who volunteered in the call included Stefan Bode, from the local Greisheim town radio club; Stefan provided frequency control for up and downlink Doppler compensation and acted as back-up for manual antenna pointing; he also ran the amplifier that broadcast the conversation on-site to the public at ESOC. Many other members of the club supported the effort as well.

In the call, after answering questions on a typical day aboard the ISS (scientific experiments and on-going maintenance) and what the crew do for relaxation (call their families and watch DVDs), Astronaut Fincke wished ESOC visitors “A special goodnight” before the station orbited out of line-of-sight radio range. He also urged listeners to “Think about other humans and our future together.”

The highlight of the evening for many was the public amateur radio call with the ISS crew participating from 360 kilometres above.

After answering questions on a typical day aboard the ISS (scientific experiments and on-going maintenance) and what the crew do for relaxation (call their families and watch DVDs), Astronaut Fincke wished ESOC visitors “A special goodnight” before the station orbited out of line-of-sight radio range. He also urged listeners to “Think about other humans and our future together.”

Editor’s Note:
An initiative of Germany’s Stern magazine, Long Night of the Stars aimed to boost public support and understanding of space science, astronomy, and space-related research, education and industry. The Long Night was supported by the European Space Agency, as well as Germany’s Ministry of Education and Research (BMBF), automaker Mercedes Benz, the German Space Agency (DLR), the European Southern Observatory and the Association of Friends of the Stars (VdS).